Greater indulgence into use of nicotine either via smoked or smokeless form in patients with schizophrenia has been accounted in literature numerous times. Prevalence studies of use and dependence of nicotine are less. Thus this study aimed to find more about use and dependence of nicotine and readiness to quit among schizophrenic patients.
Ninety seven patients with Schizophrenia were studied. A hospital based, descriptive, cross sectional study was done at Department of Psychiatry, Tribhuvan University Teaching Hospital (TUTH). To screen the nicotine users WHO STEPS was used. For smokers Fagerström Test for Nicotine Dependence was used and for smokeless tobacco users Modified Fagerström-Smokeless Tobacco was used. Assessment of Motivation: Readiness to Quit Ladde was applied to assess motivation. Twentieth version of Statistical package for social science (SPSS-20) was used to analyze data. Among 97 patients enrolled in the study, 55.7% used tobacco in one form or the other. Smoked tobacco only was used by 50% whereas 27.8% used both somokeless and smoked tobacco. Moderate nicotine dependence was found in 77.7% of smokers whereas 53.3% of combined users were highly dependent. Readiness to quit median value was four. It was found to be statistically significant (p<0.05). It was found that in schizophrenics prevalence of nicotine use and dependence is high. Increased tendency to retain nicotine using habits was seen when both smoked and smokeless tobacco were consumed. 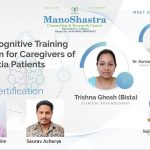 Announcement of Neurocognitive Training Program for Caregivers of the Elderly

The executive functions in remitted and symptomatic obsessive compulsive disorder

Nicotine Dependence And Readiness To Quit Among Patients With Schizophrenia: Experience From Nepal

To study the relationship between religious coping spiritual well being, and marital adjustment, among the wives of males with Alcohol Dependence Syndrome

Prevalence and correlates of Depressive Symptoms in Young Adolescents of Nepal